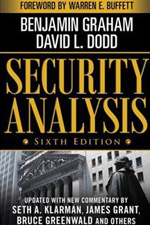 “First published in 1934, Security Analysis is one of the most influential financial books ever written. Selling more than one million copies through five editions, it has provided generations of investors with the timeless value investing philosophy and techniques of Benjamin Graham and David l. Dodd.
As relevant today as when they first appeared nearly 75 years ago, the teachings of Benjamin Graham “the father of value investing”, have withstood the test of time across a wide diversity of market conditions, countries and asset classes.” (excerpted from the book cover)

The Intelligent Investor, by Benjamin Graham

“The classic bestseller by Benjamin Graham, perhaps the greatest investment advisor of the twentieth century, The Intelligent Investor has taught and inspired hundreds of thousands of people worldwide. Since its original publication in 1949, Benjamin Graham’s book has remained the most respected guide to investing, due to his timeless philosophy of “value investing”, which helps protect investors against the areas of possible substantial error and teaches them to develop long-term strategies with which they will be comfortable down the road.” (excerpted from the book cover) 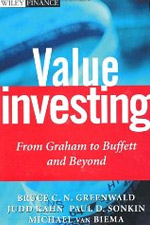 Value Investing from Graham to Buffett and Beyond,
by Bruce Greenwald et al.

“…Built on the works of Benjamin Graham, the father of security analysis, value investing is based on the premise that the underlying value of a financial security is measurable and stable, even though the market price fluctuates widely. The core of value investing is to buy securities when their market prices are significantly below their intrinsic values. Graham called the gap between price and value the “margin of safety”. A large margin of safety both increases the potential return and reduces the risk of loss.
In Value Investing, the authors enrich the discipline by exploring its history, explaining its underlying principles and setting guidelines for its successful application.” (excerpted from the book cover)